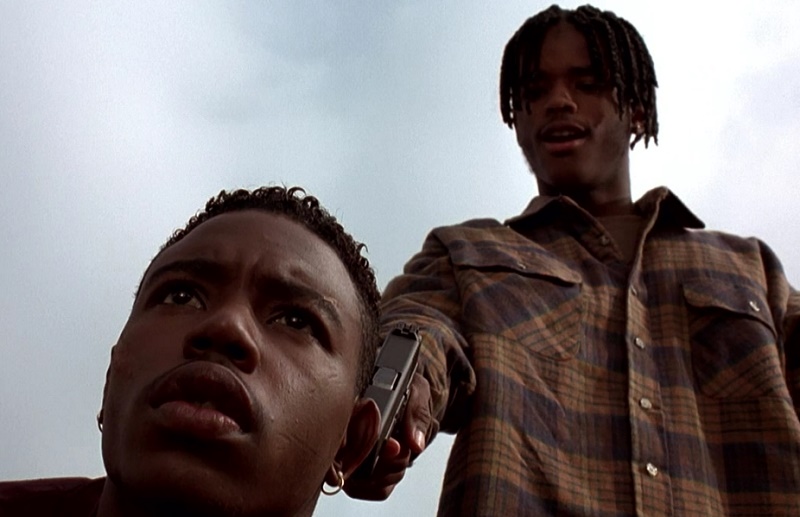 1993’s Menace II Society is one of Hollywood’s best hood films ever, directed by The Hughes Brothers. This film showed the harsh reality of gang-banging lifestyle in South Central Los Angeles at a time when the murder rate in all ghetto’s were at a all time high. Tyrin Turner who plays the character of Caine, a young black male who grew up around junkies, pimps and hustlers.

Caine father was killed during a drug deal and his mother was strung out on heroin. Caine’s grand parents decides to let him stay with them in hopes he’ll graduate from school and get a decent job, but little did they know that peer pressure will take him under. O-Dog, Caines right-hand-man was a hot head who didn’t give a expletive about nothing and nobody.

Drinking 40 Ounces was an everyday thing in South Central, and so was stereotyping from middle class citizens who owned small business like the Korean store clerks who suspected Caine and O-Dog of stealing, but they would never think in a million years this would be their last time stereotyping two black males. O-Dog shot and killed the husband and wife, and from there Cains life would change dramatically.

SO now Cain is hustling on the block, not listening to his grand parents instructions, and being confused as to whether he was afraid to live or die. Usually when you’re living the fast life, “Living Or Dying” is not in your head while you’re out there clocking dollars, it’s more like “Let The Chips fall where they may’ type of mentality.

Cain stared at the face of death when him and his cousin Harold was carjacked at a stop light by some gangsters who didn’t have anything to lose and everything to gain by smoking them if they didn’t give up their ride. Harold head was blown clean off his shoulders for resisting, followed by Caine taking a few shots himself, but survived.

Caine and his goons assured retaliation as of result of Harold getting killed, and they succeeded in getting their enemies smoked. At this point Caine is in way too deep, and it doesn’t make it any better that he’s hanging around peers who encourage that kind of lifestyle. A beautiful young lady sparks Caine’s interest, they hook up and make out, she comes up pregnant, but Caine denies responsibility.

Llena didn’t like her emotions being played with so she got her cousins involved to make him act right, but they were met by O-Dog and a beat-down / stomp-out. Cain’s other girlfriend who he cared about so much suggested that he leave L.A. and move to Atlanta to start a new life, but it was too late. As Caine was fixing to leave, Llena’s cousins drove up and started blasting away, killing Caine instantly.

O-Dog fired shots, but didn’t get hit. The end or is it? We think their should be a “Menace II Society 2” simply because O-Dog didn’t die, and here’s how we see the sequel playing out. O-Dog get’s locked up as a Juvenile for the murder of those two store clerks, serves 17 years in prison, and while in prison get’s a letter from his longtime girlfriend stating that she’s pregnant with his child.

O-Dog see’s a picture of his newborn baby and concedes that this child looks just like him, so he writes his child’s mother back to let her know how happy he is and he never felt like he had a reason to live until she broke the good news. O-Dog is on his last year after serving a 17 year sentence and by this time, his son is 16 years old.

O-Dog’s babymother writes him another letter explaining to him that she and their son will be moving to Chicago because they couldn’t afford the house they were living in + her great uncle had a paid condo waiting for her in the midwest. O-Dog doesn’t agree with her and his son moving in the middle of the United states of America, but he had no other choice but to accept what he couldn’t change.

O-Dog get’s release 6 months early for behaving well in prison, comes out to greet his child’s mother and ask her “Where’s LiL O-Dog JR?” she replies “I told him you were getting out today, but he and his friends were on our porch shooting dice”. O-Dog pulls up on his son and said to him “Wassup Boy! come and show your daddy some love” LiL O-Dog Jr. replied “That’s gay, we don’t do that around here homie” O-Dog Jr friends laughs at him.

O-Dog Jr. told his friends to “Shut The F Up” “That’s my pops, and I was just playing”. “All Y’all N*ggas empty your pockets and show my father some love, he’s an OG from way back, and he put in that work” Jr friends did as instructed, but to O-Dog Sr., the power his son had didn’t sit well with him and amazed him at the same time. And he noticed his son favorite color is red and so was his friends.

So O-Dog Sr ask him “So you’re gang-banger now Jr?” Jr replied “Welcome To Chi-Raq” “And just like you and Caine had to be careful of wearing the wrong colors in South Central, you have to watch your ass out here too”. How does O-Dog try to tell his only son that gang violence isn’t the way? Does O-Dog still have that South Central Los Angeles mentality? Will he let his son drag him back into a world of violence?

We don’t know, but would definitely would like to see the sequel to “Menace II Society” if they ever decide to make another again. Think they should make another one based in Chicago? or leave a classic a classic? Thoughts below.